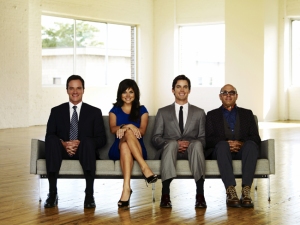 The best dressed cast on television is definitely the cast of White Collar. Character Neal Cafferty played by Matt Bomer has gotten plenty of praise for his dapper ways on the show. But the rest of the cast, especially Mozzie (Wille Garson), are also quite fashionable. Neal has a love of sharp, expensive suits, while Mozz is a bit more eclectic. Jeans, sports jackets, ascots, and quirky footwear. Even FBI agent Peter Burke (Tim DeKay) and his wife Elizabeth Burke (Tiffani Thiessen) dress a bit better than their parts would seem to require.

By the way, the show isn’t bad either.